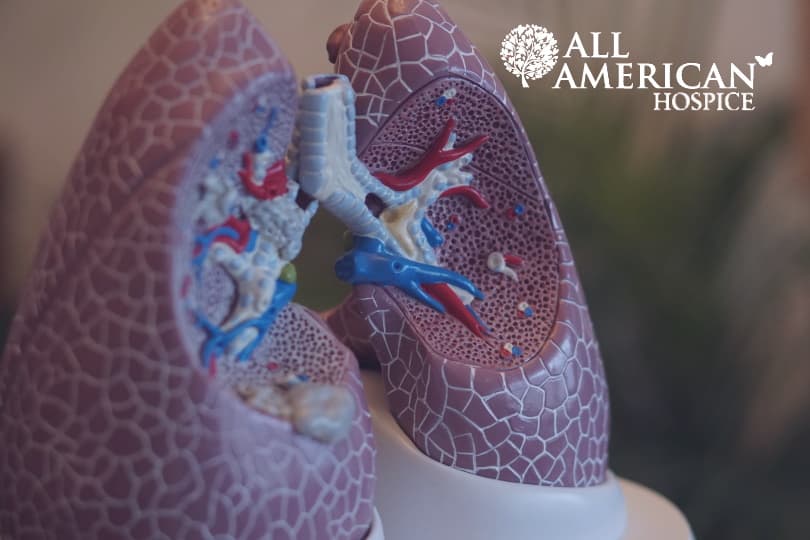 The term “chronic obstructive pulmonary disease” (COPD) refers to the conditions of emphysema and chronic bronchitis. It’s a condition that worsens over time. The body’s ability to take in enough oxygen decreases over time, which ultimately leads to COPD death.

Even though COPD can be managed for decades, there is no cure. That’s why it’s critical to know what happens in the last stages of COPD and when to call hospice.

In this post, we discuss the warning signs and COPD stages of dying that suggest that a person is reaching COPD’s final stages. We also talk about the COPD death timeline and ways to assist people to feel more at ease during COPD’s final hours.

What Is End-Stage COPD?

End-stage COPD, also known as COPD stage 4, is the most advanced stage of the illness. Most people attain it after years of suffering from the disease and the resulting lung damage. As a result, your living quality is poor. Exacerbations, or flares, will occur frequently, with one of them potentially fatal.

A lung test called spirometry will determine if you are in stage 4. It demonstrates how effectively your lungs function. It assesses:

How Long Does Stage 4 COPD Last?

When it comes to estimating someone’s life expectancy with COPD, there is no one-size-fits-all solution. To some extent, this is influenced by several factors, including one’s health status at diagnosis, one’s lifestyle, and one’s post-diagnosis efforts to mitigate its impacts.

What Are the Symptoms of COPD in Its Late Stages?

The severity of the signs and symptoms varies depending on the stage of COPD, and they get worse during flare-ups. COPD is divided into four stages:

The symptoms are minor and generally go unnoticed, but lung damage develops. Patients may only experience shortness of breath when they exert themselves.

In stage II, symptoms are more severe and there is a moderate impact on quality of life, compared to stage I. Patients are diagnosed with

In stage III, symptoms get significantly worse. The influence of Stage III on quality of life is greater. Furthermore, patients may appear with

As COPD advances into its later stages, a person’s symptoms may become more severe. This happens after the lungs have been damaged for years. Patients’ stage III symptoms have deteriorated, and they suffer frequent flare-ups that can be lethal. Stage four COPD patients have an FEV1 of less than 30%, indicating that their lungs are badly damaged and underperforming. The patients’ quality of life is quite low. Patients suffer from:

Your doctor will continue to use the same treatments as at earlier stages, however, you may require new doses, combinations, or more frequent administration of certain of them:

Reach Out for Support

End-stage COPD can be overwhelming. The physical discomfort of COPD can be alleviated by seeking appropriate hospice care. Mental health services and relaxation techniques can also be provided by them, as well as medications to help you breathe easier. If you’d like to contact a hospice expert directly or schedule a consultation, you can do so at All American Hospice.

What Are the Stages of Pancreatic Cancer? Signs, Symptoms, and More
Is 24-Hour Hospice Care at Home a Viable Option?