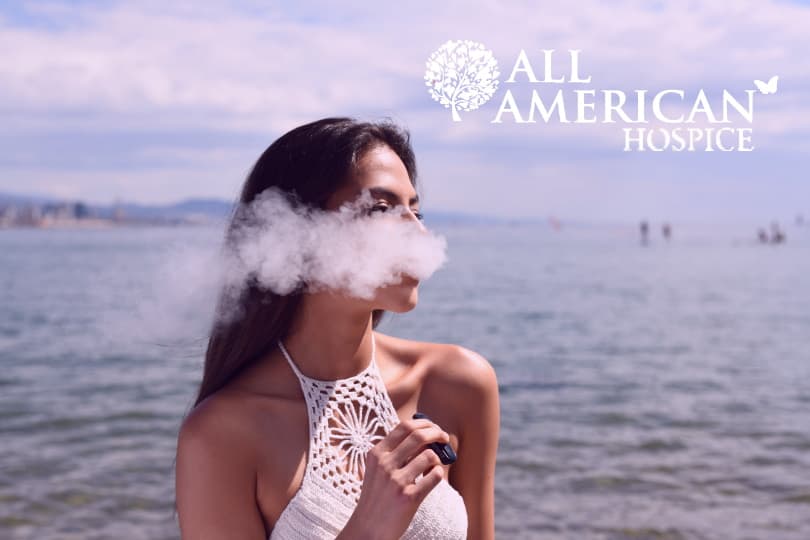 Does Vaping Cause Cancer?

A leading cause of early death and many diseases are cigarette smoking. As an answer, a Chinese pharmacist named Hon Lik developed the first device that will become the preferred substitute of many worldwide – vapes.

Over the years, adults and youth – both of middle and high school age – have turned to use e-cigarettes. This increase in tobacco use only means that more people are prone to diseases and the aftereffects of vaping.

One of the questions that still hang in the air whenever these e-cigarettes are mentioned is the query: “Can vaping cause cancer?”

E-cigarette cancer has been studied, but there is still insufficient evidence to say that they definitely cause cancer explicitly. Only time will be able to tell just what the effects are of prolonged usage of vapes as they are still relatively new in the market. This lack of current research regarding e-cigarette cancer links makes the question of “Can JUULs cause cancer?” hard to answer, as there is no direct evidence that connects vaping to cancer.

However, current research suggests that vaping increases an individual’s risk of having cancer. When comparing tobacco versus vaping, cancer risks are lower when vapes are used, but the risks still exist.

So what does the available research tell us? There have been studies that show the connection of vaping to the increased risks of having the following type of cancers:

Although more research is needed to specify the effects of vaping on the lungs, several pieces of research establish a link between vapes and lung cancers- such as that of a 2017 animal study. In this study, the vapor in e-cigs is found to affect the DNA, which is a specific prohibition of DNA repair in lung tissues.

From tooth cavities to oral cancer, many peer-reviewed studies show that there is a connection between vaping and oral infections. Continuous usage of e-cigarettes also gives way to gum diseases that may lead to strokes and high blood pressures.

A 2019 mice study revealed that the vapor in e-cigs does cancer-causing cellular damage to both the lungs and the bladder causes lesions. These are usually done by the heavy metals from the liquid and the vape coil inside the e-cigarette. These particles cause poisoning and tissue damage.

Does Vaping Nicotine Cause Cancer?

There are several studies that support the theory that nicotine causes cancer.


Research regarding the health risks directly caused by vaping is also disturbed by the fact that most e-cigarette users were previously tobacco smokers. This makes it hard for researchers to pinpoint which effects were caused by the tobacco and which are caused by the vapor.

A Closer Look: What Is Vaping?

Vaping, in its simplest sense, is a simulation of smoking. It uses devices that create vapor through a heating element that the user inhales to mimic the sensation of traditional smoking.

Vaping has steadily grown in popularity in recent years as the healthier substitute to the traditional way of burning tobacco, marijuana, or other drugs. It’s marketed as a healthier alternative because the products usually used in vaping have half the usual nicotine than that of cigarettes. But does less nicotine mean fewer risks?

Vapes are the devices used to inhale the vapor in vaping. These devices run on batteries or are rechargeable and have cartridges or a place to hold the liquid. Some vapes look like cigarettes, but some look like flash drives, pens, and other everyday items. They come in different colors and sizes, depending on the liking of their user.


There are also different kinds of vaping devices such as:

JUUL is a famous brand of e-cigarette with devices that look like flash drives or USBs. They also offer an array of flavors to their users, contributing to their overall popularity. This brand is the largest retail of e-cigs in the United States, controlling almost 70% of the market. “Vaping” is often interchangeable with “JUULing” because many users refer to them as the same activity.

How Does Vaping or JUULing Work?

An aerosol product is produced when the liquid is heated. This vapor often contains flavors and other chemicals, and even metals such as tin and lead. The vapor goes through the device and into a mouthpiece so the user can inhale it.

Is Vaping or JUULing Healthier?

Yes, but it’s not 100% safe. Although vapes contain less than the 7,000 chemicals in tobacco that cause cancer, the vape or JUULl health risks are evident. They still have harmful chemicals that can cause other complications like lung disease, heart disease, and even cancer. Bystanders can also unintentionally inhale the vapor in vapes and be at risk of the same diseases the user faces.

Although vapes are considered the better option, the Food and Drug Administration or FDA still hasn’t labeled them as an aid to help anyone who wants to quit smoking. Aside from the lack of research, there are other ways and medications already approved by the FDA to help people quit on their cigars.

Switching to vaping may be beneficial to your health rather than staying with burning tobacco. However, the user is still exposed to the many risks that accompany this device.

What Are the Vape or JUUL Dangers?

Even if it’s highly considered the healthier alternative, many studies and research have still proven the risks involved with vaping.

The solution or aerosol in vape devices has cancer-causing chemicals that penetrate through the lungs even if they are relatively less than that of burned tobacco. The aerosols in e-cigs are not simply “water vapor.” Even if health consciousness causes JUULs to be more favorable than tobacco, the chemicals in aerosols can still cause respiratory failures, among others.

Some of the chemicals in vape’s aerosols are as follows:

Nicotine can be found in raw tobacco leaves and is addictive no matter what form it is. It becomes addictive because nicotine releases dopamine — a neurotransmitter that has something to do with human reward and motivation. Over time, those who let nicotine in their system will be dependent on this chemical messenger and will undergo withdrawal symptoms like anxiety or depression when they stop letting nicotine into their bodies.

Some products of JUUL contain more nicotine than others. Some pods even contain 5% nicotine by weight, which is twice those of other e-cigarettes. This is dangerous as more nicotine means more chance of being dependent on it.

Does vape juice have nicotine? Yes, most e-liquid or e-juice contains nicotine. It’s found in many e-cigarettes, and not all are listed on the labels.

It’s also more dangerous for an adolescent brain or those who are still below 25 years of age to vape. It is harmful to young adults, especially those who are pregnant.

Benzoic acid is also called the VOC or the Volatile Organic Compound in vapes. It’s a preservative usually added to foods. Having a low level of benzoic acid in your system is not toxic, but once the levels rise and you have a high dosage of it in your system, it becomes poisonous.

This compound is not made for inhalation, but it’s included in vapes to make nicotine easier to inhale. Some side effects of benzoic acid are the following:

A study found out that 39 out of 51 e-cigarette flavors contain diacetyl. Diacetyl gives fruity and candied flavors in vapes that most young adults love. This organic compound is used as a food additive and flavoring for dairy products and is safe when ingested but not when inhaled. When diacetyl is inhaled, it will cause damage to the lungs and may even scar them. It can even lead to a severe lung disease called bronchiolitis obliterans or “popcorn lung.”

Other effects of inhaling diacetyl include:

Because of its dangers, using diacetyl in vape products in the European Union has been banned since 2016.

Continuous use of the carrier solvents propylene glycol and glycerine that are found in e-liquid refills of vapes to have a clear vapor may lead to inflamed lungs.

These primary ingredients in vapes are also harmful to the cells. The more there are in the e-liquid, the more toxic they become.

It’s also very possible that the chemicals in vapes are modified or changed altogether and may contain dangerous substances. Also, remember that even if there is no smoke produced in e-cigs, the vapors from the devices can be harmful to other people. This is called the “secondhand aerosol.”

Aside from the chemicals that are present in the aerosol of vapes, users are also prone to accidents caused by vaping. They are as follows:

Faulty batteries in vapes cause fires and explosions that result in injuries. Most accidents happen when the device’s being charged, but others also come about when the device is being used. Such as the story of a 17-year old boy who ended up with broken teeth and displaced jaw when his e-cigarette exploded while he was on the bus.

The liquid in e-cigarettes can be poisonous when swallowed by children and adults alike. In small amounts, the symptoms are nausea and vomiting. In more significant amounts, it can be serious poisoning, especially for toddlers.

All American Hospice is Here for You

Diseases connected to vaping may take years before taking effect, like lung cancer that is mostly diagnosed when a patient reaches the age of 65. When you or a loved one comes to this stage, and you’re looking for a place that will take care of them with compassion and the utmost care, feel free to contact All American Hospice.